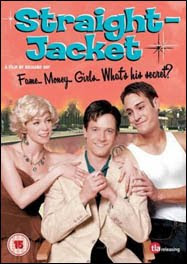 For three years in the fifties, while he was one of the world's biggest movie stars, Rock Hudson was married his agent's secretary, Phyllis Gates. This is pretty much universally viewed now as a beard relationship to cover up his homosexuality from the public. The jury is out on if it was a sham, and if Gates was a dupe, but this marriage is the inspiration for the comedy Straight-Jacket.

Movie Star Guy Stone (Matt Letscher) is the Hudson stand in here. An extremely promiscuous love-'em-and-leave-'em lothario I find hard to believe was able to stay on the "QT and Hush-Hush" in the 50's. His behavior certainly wouldn't fly under the radar today. If Hudson was anything like this the Hollywood gossip machinery really did work at controlling the message.

After losing the lead in "Ben-Hur" after getting netted in a Police bar-sweep, his manager Jerry (the always delightful Veronica Cartwright) decides he has to get married as a cover up. Much like Mrs. Hudson, the secretary of the studio boss is played for a patsy and becomes Mrs. Sally Stone. (Carrie Preston, who played the part on stage)

Part of the fun is that it seems Guy's sampled the wares of just about every man in the movie, excepting the studio boss and those of rival star Freddie Stevens (Jack Plotnick). Meanwhile, the oblivious Sally starts acting as she thinks a Fifties housewife should: cooking badly, redecorating worse (Ceramic Elephants, anyone) and letting double-entendres fly over her perfectly coiffed head. She bowls right over Stone's bitchy Major Domo, Victor (Michael Emerson, long before he was Ben Linus on Lost).

Soon enough, Guy is falling for an idealistic novelist (Adam Greer). Hey, I do loves me writers myself, so I for one totally get it. Mostly it seems he falls because Rick the novelist has the temerity to play hard to get... for about 4 whole, record-breaking minutes (hey, love is fast sometimes). Their rapid-fire romance is supposedly "star-crossed" and obvious to everyone (excepting Sally) but mostly it does feel forced. This is a pretty verbal comedy, so the plot keeps bubbling along so it's not the focus. One does wish the leads sparked a bit more though.

Of course, Rick the writer is just a little too idealistic. He's not as naive as Sally, but he comes close. We watch our great big star topple form the top of the mountain and have to climb back up again while Guy and Rick play "Will they or won't they?" It's a predictable journey, though one fun enough to take with these characters.

Jennifer Elise Cox (Jan from the "Brady Bunch" films), Clinton Leupp ("Miss Coco Peru") and Tom Lenk ("Buffy, the Vampire Slayer") show up in bit parts. They're nimble comics and I wish they'd had as much screen time as Plotnick. If you've never seen Girls Will Be Girls, he's brilliant in it, as is Leupp. The whole cast is gold (though I have no idea why Cartwright agreed to play a quick scene on a toilet).