Jay's Review: According to Greta 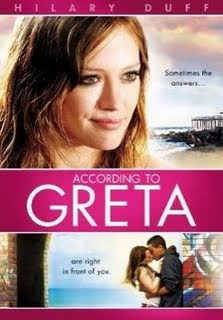 A film that starts out absolutely insufferable but matures by the end into a surprisingly engaging movie... my dvdsnapshot.com review:

OFFICIAL SYNOPSIS:
Hilary Duff delivers the most unexpected performance of her career as Greta, a rebellious 17-year-old 'exiled' for the summer to a sleepy Jersey shore community where she immediately informs her grandparents (Michael Murphy and Academy Award-winner Ellen Burstyn) of her plans to kill herself by the time she turns 18. But before Greta can cross suicide off her 'to-do' list, she'll begin a romance with a young cook from a troubled background (a star-making performance by Evan Ross of Pride), confront a tragic family secret and maybe even discover the promising young woman beneath her sarcastic shell. Just when Greta's looking for a way out, will life find a way back in? Oscar-nominee Melissa Leo (Frozen River) co-stars in this always-surprising comedy/drama executive produced by Hilary Duff.

OUR TAKE:
Well isn't Hilary Duff just the cutest suicidal teenager ever? Glib and overplaying it, she aims for petulance and comes of labored as just about every line out of her is like the rude version of a character from the "Dawson's Creek" dialogue school. Six minutes into the movie you're telling her to just knock herself off already. It's frankly hard to believe Ellen Burstyn isn't being anything but gracious in not bulldozing the child completely. (Burstyn hides her iron core for most of the film, but does get to sparkle in one speech towards the end.)

The whole feeling of According to Greta is "Television Pilot." Our lead moves in with her slightly wacky grandparents and gets a job in a quirky workplace. There's a wacky neighbor and a completely bland love interest (the completely dead-eyed Evan Ross). At one point, Greta walks through Asbury Park, New Jersey - which is exaggerated into evidently being "post-apocalyptic." Disaffected Greta crashes into the lives of her grandparents and immediately starts trying her darndest at being "dramatically difficult" in a way that'd get your ears boxed in real life. On the whole, it's a jumble that I think I'd actually like it more AS a TV show than an actual feature film. That said, both Greta and the story mature if you stick it out for the duration and by the end, the film has stealthily engaged you.

There's a decent selection of music in the film, both score and songs, and some fun interstitial animations of Greta's "Diary." (Weren't there animated parts of Duff's "Lizzie McGuire" TV show?) If you're a fan of Duff's, I suspect you'll see it as major growth in her career. If you've spent some time in the film trenches, you won't find as much to spark to, but I think young adults will enjoy this one (an episode of geriatric intimacy aside) because they'll relate to the perspective the story's told from. It's fairly predictable but as a family-friendly PG-13 title, it ain't bad. Greta herself is just a bit insufferable.


SPECIAL FEATURES:
According to Greta is presented in Widescreen with English Dolby 5.1 Surround Audio with English and Spanish Subtitles. The special features offered are a behind-the-scenes featurette, Deleted & Alternate scenes, and an Alternate Ending.


CONCLUSION:
Not the favorite film of the Asbury Park Chamber of Commerce, According to Greta is a TV pilot Sheep in a feature Wolf's clothing. I think teens will relate to the viewpoint of the film, and their parents can sit through it. (Don’t worry, a scene of teen intimacy is responsibly handled) If you don't have a teen in your life you may not have much to take away from this film. The first two thirds of the film can be pretty grating, but the last half hour mellows and unexpectedly rewards.