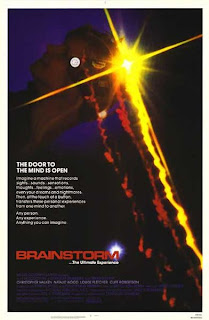 I'd tell you more but I don't want to spoil things. Chances are if you weren't an adult when this made the cable-rounds in the mid-eighties you haven't seen it. Truly, though, this one is worth a watch. The story is a slow build, showing scientists actually doing that time-consuming task: science! (Along with the most realistic illustration of thinking through the process of hacking computers perhaps ever depicted in a movie.) You wind up engaged and invested in their progress, though you'll marvel at how quickly the get this rig down from an enormous, room-filling construct to something between headphones and horse blinders, then finally a glorified Bluetooth headset. (Wood's character whittles that thing down so fast she should be working for Apple.) When intrigue rolls in, you're hooked and ready to see what develops. Likewise, and perhaps it's the empathy Wood evokes, you're invested in watching Michael and Karen Brace work on their marriage. (Once you see the house you'll root for them sticking together...) It's not a forced storyline, and the awkward meetings of estranged spouses who work together is handled deftly. Even their boss, played by Cliff Robertson, is a dynamic, torn character... though he does rock some really awful riding boots.

First off, the cast is fantastic. Young Christopher Walken, before he fell fully into his shtick, is surprisingly normal and nuanced. Louise Fletcher, so under-served by not being a purdy young thing in Hollywood, is absolutely natural and proves again what an intelligent talent she has. As an aside, I recently re-watched Exorcist II: The Heretic, though I didn't have the heart to review it. She's absolutely the best thing about the film (upstaged only by Linda Blair's rack (itself creepily emphasized considering she was under 18 at the time)). Fletcher holds that movie together and is the only thing remotely resembling a human being in it... even if Gene Tusken is in many ways a sloppy and irresponsible doctor with total disregard for her patient's privacy. Her first crying scene is a bit hammy but she dominates a room with a steely glare and the best-wielded cigarette this side of a Bette Davis movie.

Natalie Wood is possibly the weakest of the three leads, but who knows what was left to film of her performance? She's still every bit a movie star, and a strong actress who exhibits naturalism, strength, and poise. Most noticeably, and refreshingly in retrospect, she looks like a 43 year old woman. Admittedly, a stunning one, but she's a botox-free lesson in expressiveness today's beauty queens should learn from. You wonder what her career had in store for her if she'd lived longer, and what a grande dame she might be at 74.

Secondly, the effects sequences stun. The aspect ratio keeps changing on the DVD and must have been more disorienting in the theater. Real life is a normal 35 mm 1.7:1 aspect ratio box. The virtual reality of the device comes at you in a screen-filling 2.2:1 70mm wow. The image is sharp and overwhelming, while the more "special" effects turn out to have aged well. The end is a bit... hokey, but on the whole this is definitely a watchable flick. The fashions date this film more than the tech or effects. Brainstorm is overshadowed by it's history, but definitely rewards a watch with it's virtues.
Posted by Jay at 10:20 PM