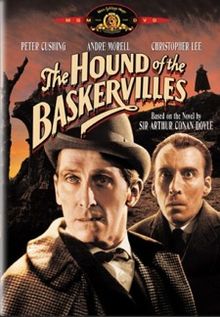 Peter Cushing and Christopher Lee are as comforting a team as Abbott and Costello, Martin and Lewis, or Steve and Edie. Hammer films, be they horror or a mystery-thriller like this, are as comforting as house slippers. Mannered, stage-bound, and always hinting at much darker thrills than they show, this studio produced gem after gem. All together, it's a match-up equal to chocolate and peanut butter.

The Hound of the Baskervilles is perhaps the most famous of the Sherlock Holmes stories, and this is one of many versions of the film. Cushing as Holmes and Andre Morell as Watson, however, have a take on the characters that seems somewhat... breezy. Cushing's Holmes is more a sharp and insightful showoff than someone truly driven by their genius intellect and preternatural powers of observation. Just the smartest man in a roomful of dim bulbs.

He's also a fairly emotional Holmes who makes some rash mistakes and assumptions, which is a dimension you don't see enough in this character. Invited to investigate the death of the lord of Baskerville Hall, where the prologue showed us a murder committed by the debauchery-minded Sir Hugo, who was then himself killed by "something."

Sherlock Holmes, never one to suffer fools gladly in any incarnation, agrees to investigate the death and descends upon Sir Henry (Christopher Lee). The son of the deceased Sir Charles, he's the new lord of Baskerville Hall, and a bit of a jerk. (Okay, he's a big jerk.) Sir Charles dropped dead, perhaps running from the mythical hell hound that curses the family. It's equally possible, though, an escaped murderer named Selden might have had a hand in the proceedings. So is the threat something supernatural, or just a prosaic murderer? Worse, will the family heart condition knock off Sir Henry before anything else gets a chance?

After a melodramatic tarantula attack, the film moves along with Dr. Watson to the primary setting, Baskerville Hall, which is a large and beautiful set of a manor home. It's good the house is a lovely, dustry treat, since this is where the film settles in for lots of mannered talk. A comic relief bishop drops in to lighten things up. A wild local girl, Cecile, also shows up to add the polite cleavage that passes for spice in a Hammer picture.

The mystery comes together with far-fetched connections and daring-do down in the mines, and it's marvelous. Not that it's particularly stirring, or brilliant, by any means, but the conclusion is rousing and satisfying. The comforts of a solid, well-made Terrence Fisher Hammer flick are never to be discounted. Professional, solid entertainment perfect for a lazy afternoon.
Posted by Jay at 7:25 PM