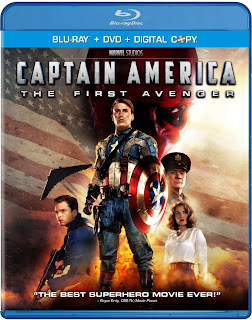 I was surprised they actually let the story breathe and introduce the man behind the superhero. I'd fully expected them to rush headlong into it within the first standard 17 minutes of Act One. I'm familiar with a few different versions of Cap's origin story and the recreation here is thorough and far more loyal to the comics than, say, Fantastic Four was. They even stuck with Vita-rays and the killing of Dr. Erskine... which is not a spoiler as the character is over seventy years old. This is one movie, though, where I wish the female lead had been more immediately in love with the male lead. You root more for her swooning over the little guy than being attracted to the irresistible gravitational pull of the mass that is Evans' chest.

Once he changes and Act Two starts, though, the action kicks off immediately. The Captain, once post bohunked, has to go deal with his Nazi opposite, the super-solider test run Johann Schmidt, the Red Skull (Hugo Weaving). He heads Hitler's Hydra and has the Cosmic Cube... I mean, the Tessaract, straight from the tie-in world of Thor. They use it to make an admittedly awesome death ray. I love death rays. Movies really need more of them. Even ones made from Jane Austen novels. (Also, listening to all the heavy German accents, I was yearning for the W-wrapping Udo Kier to make an appearance.) I was put out when these two genius super-villains used an elevator in their burning secret prison base. No sense of safety.

The Captain is costumed as a symbol and sent to Europe to take on Hydra (which is explained in some pretty glaring yet kinda painfully great exposition). First though, he gets dolled up to shill for bonds and appear in propaganda films. It's an interesting way to show how he becomes a confident public speaker and "rouser of the troops" which is a role he's served in the Marvel Universe since his Sixties resurrection. He's great with the general public, but as part of the USO in front of the real troops is where he starts to earn his stars and stripes. It's a sharp observation on how we'd take someone in that position and turn them into a commodity.

A Summer "crowd-pleaser," Captain America does a good job of keeping the audience engaged with the characters the whole time. Big super-tanks help. Also, I like believing in the man who'll leave no soldier behind. After the rousing rescue mission and first-encounter with the Skull, the origin is pretty much established and it's on to hero action. Also, that action is cleanly choreographed and easy to follow. The ending here, very stirring, though I think the bomb being labeled with the name of the city it's aimed for imples these Hydra henchmen do not have the strongest attention spans. WWII would have been much different with death rays, though... 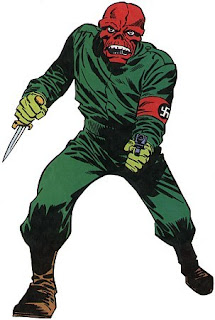 From here we'll step away from the blow-by-blow, as this is one I enjoyed and would recommend seeing. Those of us weaned on comics can enjoy seeing The Howling Commandos, Bucky Barnes, Dr. Arnim Zola,  the original Human Torch, a SHIELD character assumed by me based on the actress' resemblance to Hayley Atwell to be Sharon Carter, and Howard Stark (Iron Man's father) with the extra back story we bring to these characters. Stan Lee's cameo and Samuel L. Jackson's Nick Fury appearance, however, will surprise no one. I did get a little thrown out realizing the blonde woman who comes on to him was Natalie Dormer, who I loved as the calculating and ripely trashy Anne Boleyn from The Tudors. Hugo Weaving's Red Skull make-up is marvelous, with CGI enhanced holes in his face that work much better here than the similar effects in the Nightmare on Elm Street remake.

So, excepting some distracting guest appearances and occasionally wonky special effects, Captain America: The First Avenger is a rousing and well-paced superhero action flick that never looks too cheesy. Fun for the whole family... except for the part where people die horribly or viewers awkwardly catch themselves drooling over Chris Evans' rack.

*...and stay through the credits. Inspired by WWII propaganda posters, they're stunning... and there's a treat at the end. (Also: according to the IMBD entry for The Avengers, that was Agent 13, Sharon Carter.)
Posted by Jay at 10:00 AM