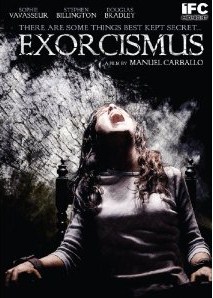 Showy practical effects and subtle CGI keep things more dread-filled than dreadful, but can't distract us from jumping ahead in our “Exorcism Movie 101” textbooks. Those effects are also more subtle than some of the performances. (The father may as well have wandered in from The Room in a couple scenes.) In a supporting part as as Father Chris' superior is Doug Bradley, wearing his history as Pinhead in Hellraiser as if in some cross-genre exchange program.

There's a death which moves things way out of the comfort zone, followed by a few twists in the last third that make this story it's own, but the devil is only in those details. After all, it's the mundane world and some petty choices destroying this family and their friends, not a big, red demon. Exploring character motivations and family tragedy sadly doesn't stand up to the flashy storytelling and showy possession bits.


Exorcismus is presented in Anamorphic Widescreen with English 5.1 Dolby Digital Audio and subtitles in Spanish and English SDH. Along with the trailers for this and other IFC releases, a 17 minute making-of featurette is included.

Conclusion:
There's comfort in the familiar symbols of religion, and there's comfort in genre film. Exorcismus brings both together in a possessed teenage girl and her fairly normal nuclear family. A mix of showy devil possession and the genuine horrors of everyday tragedies, there's nothing new here. However, it's a well-crafted watch with some strong moments in the last third.

Overall Picture:
Movie: B-
Extras: B-