One A Week Reviews #1: Frenemy

Welcome to 2011's run of One A Week Reviews. While last year I did tend to get a little behind on them (little? HA!) last year. This is a new year with a fresh start and I'm hitting the ground running. First off, let me route you AWAY from this wrongly advertised stinker, reviewed for dvdsnapshot.com! 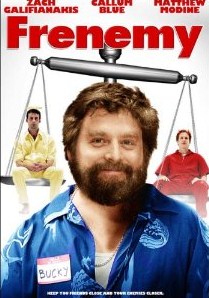 After a group of friends witness a horrifying crime, they wonder how they were lucky enough to escape, unharmed, while one friend did not. Through this self-discovery they start to understand the meaning of their own hilarious yet twisted fate. As their time starts to run out, the chance for redemption isn't too far behind.
OUR TAKE
Frenemy – once known as Little Fish, Strange Pond – opens with a scene of banter between Matthew Modine and Callum Blue so gratingly obtuse that if you bail out there, no one will blame you. Their characters, Mr. Jack and Sweet Stephan, have wandered in whole cloth from some awful undergraduate's Master Thesis play for two, layering one non sequiturs with little rhyme or reason like a psychotic Mutt and Jeff. They bring their detached banter to an adult video store run by Zach Gailfinakis. This leads to a hold-up, evidently by a bad stand-up comedian, and a never-ending, meandering debate of the meanings of life, death and evil. While Matthew Modine is usually a compelling actor, not even he can hold this nonsense together. He and Blue, lunatics bantering away, wear out their welcome early in the proceedings, making 80 minutes feel considerably longer. Adam Baldwin fares a little better as the police officer who briefly comes into their lives to save, then hunt them.
Throughout the film there are weird fade-outs to subplots that feel as tenuously connected as the digressions in a David Lynch film. This whole feature feels like a little too much Lynch and Tarrantino were watched during it's making. The twists at the end are unsurprising, and considering how absurdist the whole trip is, aren't even necessary.
Gregory Dark, director of many a porn film as part of The Dark Brothers and many Cinemax classics as Gregory Hippolyte, crafts an ominous, absurd psychodrama billed as a comedy with a big picture of Galifinakis on the cover because he's currently "hot." This packaging is as misleading as the official synopsis above. It comes nowhere near capturing the actual tone of this odd movie. Dark's been directing (in one genre or another) since the early 1980s, but Frenemy feels like a first feature from someone who overdosed on film school.
EXTRAS
Frenemy is presented in 16x9 Widescreen with 5.1 Dolby Digital English Audio. Subtitles are available in English and Spanish, and there are some trailers.
CONCLUSION
Packaged as a "comedy" to exploit the fame of Zach Galifinakis, this oddball drama is more a weird, disjointed vehicle for Matthew Modine. Frenemy is dark and offputting, a must-see only if absolutely nothing else is available for viewing. AVOID.
OVERALL PICTURE
MOVIE: D
EXTRAS: C
Posted by Jay at 10:00 AM