The oddest of ducks, this live-action videogame may be just the choice for the next time you tie one on. Reviewed for dvdsnapshot.com, but probably never forgotten...
Kung-Fu Master
Official Synopsis:
One man is faced with a life-altering choice when he is approached with the greatest honor but declines, forcing him to destroy the Kung-Fu Master Alliance in order to protect his people.
Our Take:
Does China have a SyFy-type channel for “Chopsocky” films? Kung Fu Master looks like it would belong there. This shot-on-video, low budget adventure has the feel of their “Saturday Night Specials.” The production values give the film the feel of a cable history show with actors playing dress-up for snippets of staged recreations. 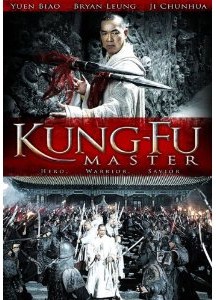 In between over-choreographed fight scenes featuring silly dubbing and too much mugging for the camera, there's a story here of master fighter Tan Zong being called by an evil General to be the Army's drillmaster. With Kung Fu schools across the country destroyed, Tan Zong must confront various groups of fighters in scene after scene of dance-like anarchy, interrupted only by his prayers to “O, merciful Buddha. It seems like every transition leads to more action. The choppy, episodic structure makes the whole thing feel like watching a friend play a video game, broken up by those animated breaks for plot exposition.

The overall structure is also weirdly hallucinatory. This one might be good after a few drinks while you use your Playstation to watch the disc.

The joy of Kung Fu films are the acrobatic fights that seem to cheat nature. In this film, it's too much, though. Everything here defies physics. The spins and leaps go too high and far. Silk sleeves crack stone and tensed skin stops iron blades. It'd be less off-putting either dialed down a bit, or presented as a Saturday morning cartoon. It's inventive, but so over-the-top it seems like a spoof. It's all just too, too much.

Special Features:
Kung Fu Master is presented in widescreen with both English and Mandarin 5.1 Dolby Digital audio options. English and Spanish subtitles and a few trailers are the only extras on the DVD.

Conclusion:
Weird cable TV production values and atrocious dubbing add a surreal flavor to Kung Fu Master. For enthusiasts of Kung Fu cinema, video game storytelling, and psychotropics only. The fighting is inventive and hypnotic to watch, but “O, merciful Buddha,” take it away. For a night in with buddies who can appreciate this odd concoction, this live-action cartoon would get a grade of “B-," otherwise...