Your boy is back after a couple weeks (okay, a couple months, really) hiatus and he's got a gem to kick off a new round of One A Week reviews.

Skyjacked is an odd, "A Picture" rip off of Airport that has all the Seventies "disaster film" tropes you know I love. It even has that terrific head shot poster practically required for this kind of movie. It's as luxe as Airport  but has the slightly trashier storyline more apropos to Murder on Flight 502. You have an "all star cast" headlined by Charlton Heston (did he carry this character on to Airport 1975? I choose to think so.) and Yvette Mimieux at her Breck Girl best (seriously, there's a killer "romantic flashback" that'd make a perfect shampoo commerical). 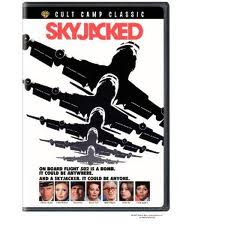 A dashing, pipe-smoking-in-the-cockpit Airline pilot and his head Stew ex-girlfriend are on a flight to Minneapolis that gets "skyjacked" with threatening notes to Anchorage. Thankfully it's a plane right out of the works of Arthur Hailey populated with a bomber, pregnant gal about to pop, mysterious Senator with a son romancing a hippie gal in first class, and Claude Atkins as George Kennedy.

They're supported capably by an overacting James Brolin, Walter Pidgeon at his Walter-Pidgeon-iest, plot point pregnant lady Mariette Hartley (you see her belly before you see her), and cast against-type-as-a-Cellist Rosie Grier. Susan Dey, Jeanne Crain, and Leslie Uggams (even classy in a rainstorm on an inflatable emergency slide) show up to decorate the airplane set with their (ahem) star-wattage.

Most impressive is the totally set-bound interiors (you see the wrinkles in the "sky" background at one point) and the sequences featuring one or more planes in flight. This was a time before CGI, after all. They're flying real planes, sometimes in what looks to be very close formation. There's a nice 1972 sheen to the whole thing with fantastic fabrics, a conservatism hungover from an older day of film-making, and stewardesses who bother to learn every passengers name and whip out the occasional Bloody Mary at the request of a woman eight months pregnant. Did I mention the captain smokes a pipe in the cockpit?

I don't know how I had never heard of this film prior to a couple of weeks ago, when I accidentally stumbled on it on Netflix.  It's really just Airport 1.5 and pleases the palate well enough for any lover of plane dramas and disaster films. In the end, it suffers what so many Hollywood pictures of the time are afflicted with. With a bomb, birth, the threat of a midair collision, unconvincing Judo, the Cold War, and more, it's still not trashy and melodramatic enough. (Lord knows they try with some truly awful flashbacks.) There's tension, soap opera, barely there subplots, and an impossibly lovely set of actresses. That's a crime, but this is still a decent way to kill a couple hours with an old-fashioned time capsule of a movie.

I just wish at some point the Stewardess got to fly the plane...
Posted by Jay at 9:25 PM