Rollercoaster? No thanks, I'll take the Scrambler instead...

On Saturday I got the lovely privilege to attend King's Island with Andy, Amy, and Freddy for P&G days. A wonderful time was had by all, though I have to be pretty grateful that they were so tolerant of my one little theme park quirk.

Can't stand them. I don't like the feeling of falling, and I don't like (well, for lack of a better term) "open-air propulsion." I'm not fond of riding in convertibles, either. Every time I've ridden one, it's been an upsetting, teeth-grinding, anxiety provoking nightmare. It's completely irrational, but there you have it.

I attribute it to being seven years old and touring the Salt Mines in Salzberg, Austria with my family. On the salt mine tour they march everyone through and put 'em in jumpsuits, then you get to straddle this weird train-like transport that runs you down the rail into the mine. It goes REALLY FAST. It goes even faster on the return trip. When you're seven, and only as strong as a seven year old, it's a rollercoaster where you come very, VERY close to flying off.

Couple that with some bumpy flights, most notable being an airpocket hit on a transatlantic trip (again, around age 7 or 8) that involved actual hang-time off the seat, with only the lap belt keeping me from hitting the ceiling of the plane, and my "free-fall" aversion was writ in stone...

Haven't liked rollercoasters since. Tried a few times, but never been able to acquire the taste for them. I can just barely handle Space Mountain and Big Thunder Mountain Railroad at Disneyworld, but I think that's because when I've ridden them, I've been so slathered up with the Disney butter that nothing would upset me.

I had a great time yesterday -for many reasons- even if I am a bit of a Theme Park cripple. I thankfully love the Scrambler - it wound up being the only thing I rode. Next time I'm there, I'm going to ride the Viking Ship ride. I watched them do it and felt like an enormous wimp... since I hate the sense of falling, I wonder if I'll like it?

I dunno, but I'm going to try.

-----
Another thing: Couldn't help but notice that KI needs to strike up a licensing deal with someone who doesn't have another Theme Park outlet. Saw a lot of Marvel and Disney properties represented in plush prizes all over the park... 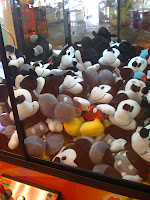 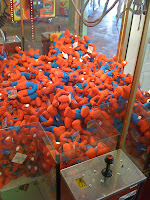