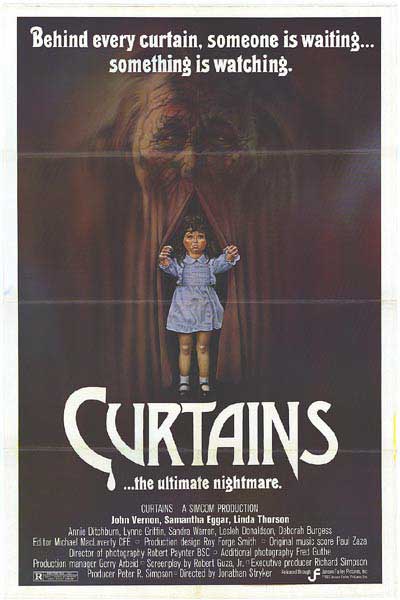 The ladies chew scenery and kill the evening. Brooke is bitter and gin-soaked, while Christie is a goody two-shoes. Another girl is in the hot tub with the only other man at the house (who I think is a handyman?), but the scene's too dark to make out who. The next morning Christie goody two-skates on the frozen pond. She finds the same doll from the dead Amanda's nightmare and then winds up attacked and killed by the Killer Hag (a commentary on aging actresses, mayhaps?), also on skates. It's a terrific scene, worth the price of admission.

While the remaining four look on, Samantha and Stryker butt heads. He demeans her and even produces the hag mask. It's such a bold choice to have him introduce it that it feels like some kind of double red herring. "He so obviously can't be the killer that he must be!" He has strong confrontations with Pattie and Samantha, and also puts Laurian and Tara through some rather inappropriate acting exercises. Meanwhile Brooke gets a nasty shock: Christie's head in her toilet bowl. (I've known some shitheads in my time, but this is ridiculous.) Mere minutes later, someone's cleaned it up so Stryker will think she's a basket case. He immediately takes advantage of her upset and disorientation by banging her. The man is clearly class, through and through.

Next up, bony Laruian (I had to look her up, I can't tell her apart from Tara) gets taken out by the Killer Hag for her bad interpretive dance. Meanwhile, poor Tara gets a fright: Stryker's body through a window. He and Brooke fell out of the one upstairs after someone went and shot them. She runs out to a creepy shed filled with props. (Momentos from Stryker's films?) She eludes the Hag, and even fakes her out in a moment of "Final Girl derring-do," but winds up ventilated in the ventilation. (See what I did there?)

Charming Patti seems our Final Girl, but instead of a confrontation with the clearly nutty Samantha, they wind up having a girl's heart to heart over champas in the kitchen. Scorned Samantha killed Stryker and Brooke, her crime of passion. Patti, meanwhile, is the psycho her took out her competition with a sickle sporting the Hag mask. Samantha becomes our tragic last victim. In the end, she was no match for a masked killer hungrier to win the part. And Patti? She closes the film doing her stand-up act in Samantha's asylum.

There's a lot of strong material and good acting in Curtains. Eggar is an accomplished actress and impresses here, better than the material. She's game to be shown both glammed up and dressed down. There's a terrific, small bit with Eggar reacting to another patient who is giggling and tickling her. Bemused, a little frightened, but open to the experience. Vernon's stentorian voice and domineering presence makes him a formidable foil. He adds a dimension that implies there's more behind Stryker's headgames than meets the eye. Lynne Griffin's self-deprecating humor turns on a dime to show confident aggression. For a little movie, there's a lot of strong chops on display. Sadly, Thorson is only given two modes to work in: "scared" and "bitch."

The video transfer here leaves a lot to be desired. Some scenes are so dark you can't tell what's going on. For an eighties slasher, the nudity this obscures is an unforgivable transgression. It's hard to tell whose body winds up where in the scene with Brooke and Stryker, too. There's a body in the hot tub we have to assume is Matthew, but it's so dark I'm not sure we ever got a good look at him anyhow.

This is a peach of an Eighties slasher and it's a shame its been so hard to find. If nothing else, the scene of finding a doll standing in the middle of a deserted road in the rain is extremely unsettling, as is the slow-motion scene of the Killer Hag ice skating with muted breathing on the soundtrack. Not a lost cinema classic, but an overlooked gem of a slasher. Curtains demands a better release.
Posted by Jay at 10:16 PM