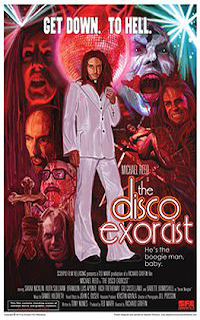 Director Richard Griffin has made several light and entertaining horror-comedies, including Splatter Disco (complete with a musical number), and here displays a deft, crowd-pleasing touch. Disco Exorcist has a pretty full plate of nudity, silly sex, and comic relief characters. It feels like a high-concept, spoof-trailer made for Youtube that somehow got bankrolled into a full feature, but also a labor of love. Vulgar, over the top and trying too hard at times, this is a Saturday night exploitation lovers' delight that'll leave a smile on your face. I, for one, will definitely be seeking out more of Griffin's work.
Posted by Jay at 9:30 PM