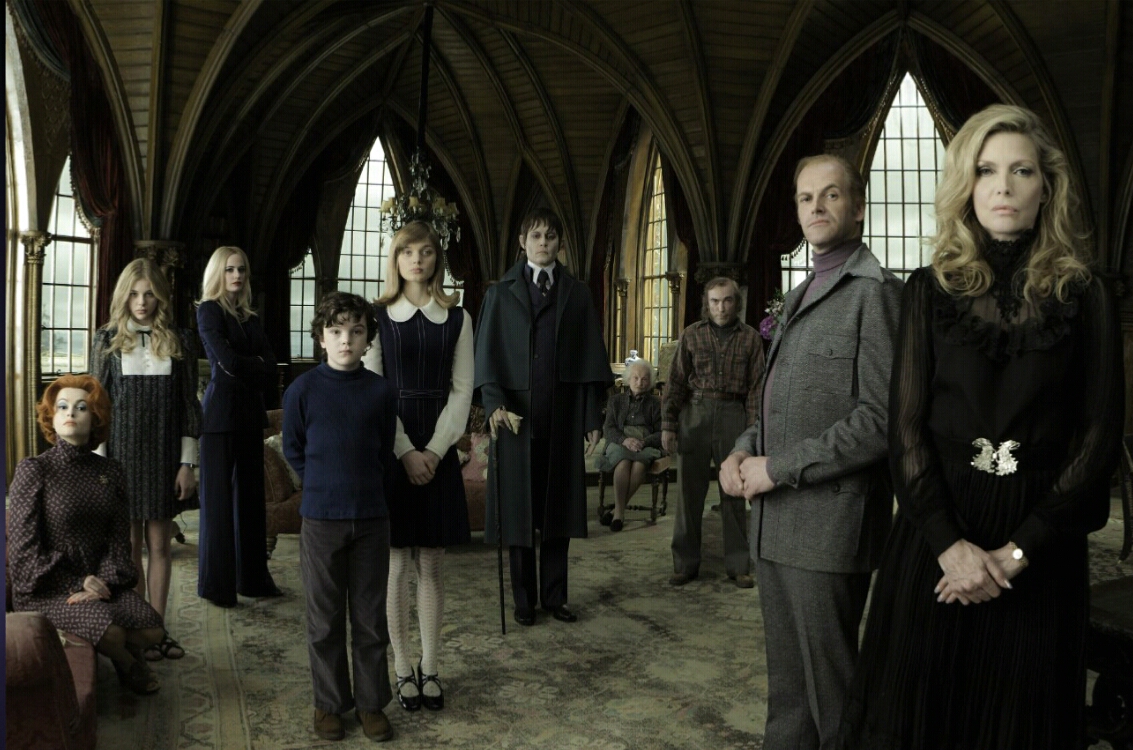 Depp is terrific, and clearly having a wonderful time. His look is incredibly respectful to Jonathan Frid's, while also seeming to invoke Michael Jackson; as if his Willy Wonka was anemic. Perhaps surprisingly, he's constantly blown off the screen by Eva Green. Her Angelique is a hoot, and very physical. All eyes and limbs (and teeth), she nails every move and moment of comic camp villainy; a delicate, tiny china doll somehow filled with enormous insanity and voracious need. You literally can not look away when she's in a scene. Her performance? C'est vraiment manifique. I don't often focus in on individual actors, but many here stand out. It's an impressive feat considering the overpowering set and aesthetics.
The other delights are probably Jackie Earl Haley's woozy caretaker Willie-a drunkenly dry Renfield indistinguishable when hypnotized to those who know him from his initial "couldn't give a fig" detachment-and Michelle Pfeiffer's Elizabeth Collins. Instead of Joan Bennett's stiff and dour archness we have a mannered Seventies mom. She's maintaining appearances and her family's pride when the cracks start to show, but when the need arises, she's ferocious without ever losing her poise. Most mercifully, Pfeiffer hasn't become an obvious plastic surgery victim, and here she's an expressive pleasure. Helena Bonham Carter's boozy Dr. Julia (my favorite character in the TV remake when played by Barbara Steele) is a droll, bitchy delight. With a smokey voice and burning orange wig, she's wandered in like a sarcastic supporting character from a sitcom. Her scenes of verbal sparring with Depp and Pfeiffer are standouts.

The original material is honored, but not slavishly; the most prominent shame is that they left out the TV show's memorable music. Period music (including a leaden and obvious use of Season of the Witch) and unmemorable score can't hold a candle to that original theme. Alice Cooper's appearance smartly integrates the soundtrack, but that spooky Theremin stays sadly absent.

There's little warmth, though there is humor. A hidden room filled with macrame, Pfeiffer's "Mom-look"eye-popping, and the entire montage set to The Carpenters are delights. The CGI is terrific (except for one character, you'll know her when you see her), but the wire-work... doesn't. A room-smashing love scene between witch and vampire and big finale fight should thrill, but instead fail to engage because they lacks gravity. For two smashing titans, you don't see physical force. You see dangling.

Dark Shadows reminds me of nothing so much as LED christmas lights. Bright and candy-colored, yet dim and somewhat unsatisfying. Much of this feels like a big, expensive in-joke; millions of dollars spent so Burton and Depp can hang out and go down their droll rabbit hole. While their recent visits to Lewis Carroll and Roald Dahl didn't connect with me, I feel like the target audience for this walk through Dan Curtis' Candyland. I looked past flaws and loved this, and know I can hang with others who do. You may not feel the same.
Posted by Jay at 11:05 AM