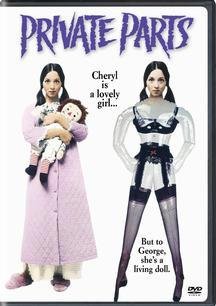 When the young and impulsive Cheryl finds presents like a dirty potboiler manuscript and an incredibly tacky negligee, she should've run screaming. Instead, she's a romantic teenager with a bent towards the perverse. Neither creaking floors nor lurking neighbors are going to stop her from creating a mysterious adventure out of an environment that would terrify anyone old enough to know better. She also meets a nice boy in Jeff (Stanley Livingston, famous as "My Three Son's" Chip Douglas), who really isn't equipped for a girl like Cheryl, who is more into the tall, dark pornographer George. While all this is going on, someone is also killing off the hotel's visitors and residents, though that dread is almost secondary to finding out where Chery's sexual awakenings are going to lead her...
Private Parts signals its final twist in the first act, but with enough subtlety as to be missed on the first viewing. There's lots of genuinely ominous imagery here. Lethally electrified key-hooks, a closet shrine for a bejeweled Jesus, and blood blossoming through a transparent, water-filled sex doll are images that stimulate the audience much as voyeurism drives the characters. A character who gets spied on discovers obscene photographs. People swing open the peepholes on their hotel room doors, not to see who's knocking, but whose walking away. A young girl finds herself in a willingly-masked bubble bath performance that only hints at the folie à deux potential.

For a film confined to a single location with what was probably a miniscule budget, Paul Bartel created a surprisingly effective and transgressive thriller. The cast features two journeyman, recognizable "Hey, it's that guy" actors in Main and Lucille Benson, who is surprisingly compelling. It's a shame Ruymen never broke big. She's a strong lead who can convincingly play both the girlish moments and the innocent seduced. She's especially endearing when naively dolled-up and "acting mature" for her big date with Jeff, playing at being a "big girl" in the "real world," which makes an interesting contrast to her seeming right at home in the dangerous and sexually simmering world of the hotel. The film itself looks great, turning limitations like the seedy hotel location into advantages. Great lighting and strong visual imagery rounds out the package for this obscure gem that you shouldn't miss. (If you've never seen Scenes from a Class Struggle, hunt it down. It's a shamefully obscure marvel.)
Posted by Jay at 10:00 AM