Jay's Movie of the Week #43: The Blood Beast Terror 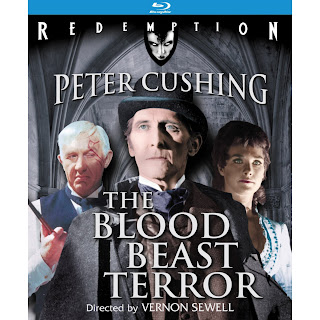 Originally reviewed for dvdsnapshot, this is some old-fashioned fun for the Halloween holiday!

While not a Hammer or Amicus production, The Blood Beast Terror is a close-enough replica. With a vaguely 1890s setting, character types, and Peter Cushing as the star, this is a fun double-bill B-movie night monster mystery. Its just missing the touch those studios had for making successful pictures.

Cushing's detective, a vaguely annoyed man more concerned with his tea than his suspects is investigating a series of unusual murders which lead him to Robert Flemyng's stuffy, suspicious mad scientist. There are a few nice touches. The story makes for a nice detective procedural for Cushing and the victims are, for a change, a string of hapless men. Some comic relief and a cheesy grand guignol theater break also add life. They can't overcome the supposedly-dashing adventurer who's every expression is a sneer, nor the pair of ingénue daughters, including one who devours every man she encounters with her eyes during fits of overacting.
It's not a surprise that our resident mad scientist is quickly exposed as the source of trouble here, going to ridiculous lengths to preserve the mystery of a monster you won't see until halfway through the movie. Once seen it's not terribly scary, but there is something undeniably creepy about it.

I give The Blood Beast Terror, also known as The Vampire-Beast Craves Blood, kudos for being the earliest film I can remember featuring one of the entertainment's laziest tropes: a scene of a “coroner” eating his dinner around dead bodies. Beyond that, it's a bizarre curio. Far from great, it still has a few strong qualities to attract fans of the genre. 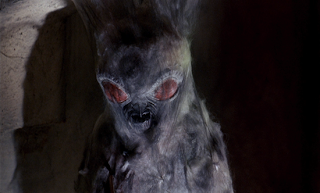 A classically told monster movie directed by Vernon Sewell (Burke & Hare), The Blood Beast Terror is set in motion when mutilated bodies begin appearing in the English countryside, drained of blood. Horror icon Peter Cushing (House of Dracula) stars as Detective Inspector Quennell, brought in to investigate the deaths. He consults entomology professor Mallinger (Robert Flemyng), but the doctor seems to be hiding a dark secret about his fetching young daughter, Clare (Wanda Ventham). The deeper Quennell digs into their story, the bloodier the violence, until he discovers a terrifying truth about Mallinger's experiments that is only revealed in the gruesome final reel.

Harkening back to the classics of Universal Pictures, The Blood Beast Terror offers terrific performances and special effects, and slowly builds to its skin-crawling climax.

The 16x9 widescreen image is restored in HD from the 35mm negative. A low-budget sixties film, it does suffer from some murky blacks, but the visuals are crisp overall. This HD remaster brings out details in dark scenes that couldn't possibly have been visible in any previous home video version. The reds of the opening titles and thick-as-paint stage blood practically glow. The mono soundtrack is clean, bright, and always front and center. The only downside of the audio is the quality makes “looped” dialogue and sound effects stand out. While clear listening, the disc offers no subtitles or other audio options.

The Blood Beast Terror is G-Rated, low budget horror thriller. A showcase for Peter Cushing, but even he can't save this bizarre little curio.