A triumph of good set design and applying gore with a ladle, Ghost Ship is a fun little number I dismissed after seeing in the theater and thought worth revisiting a decade later. Following the remakes of House on Haunted Hill and Thirteen Ghosts, this was the first original movie produced under the Dark Castle brand.

An ocean salvage crew, each saddled with a horribly blunt handles like Murphy, Epps, Santos, and Dodge are offered the gold-mine of a lifetime,brought in by Ferriman to claim the derelict Antonia Graza. Exploring the ship to salvage what they can, they wind up finding crates filled with beautiful bars of gold. Unfortunately, the ship has an agenda of its own. They also wind up meeting ghosts and their own bloody, painful demises while slowly piecing together the tragic mystery of what befell the passengers and crew on the final outing of the Garza.
The story is pretty perfunctory, getting mostly-cypher characters from points A to B to deliver scares and some good, wet death scenes. A flood of bodies, maggots for dinner, a pool that fills with blood. I assume it'd be significantly more pleasant to sail Carnival. The climactic reveal of what happened to the rest of the passengers is a camp symphony of grizzly death and double-crosses. That gold also came from The Lorelei (a name as loaded as Ferriman), and any ship named for the siren who lured sailors to their deaths must of course have cursed booty you'd want no part of... 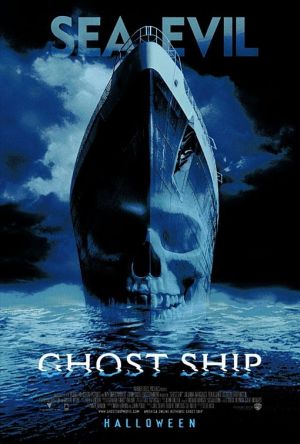 The showpiece remains the film's opening scene. Among throwback, bright pink Fifties-style titles, a well-heeled crowd of dancers crowd the dance floor, until someone sets off a high-tension steel cable booby-trap which whips across the deck. The dancers pause, then slowly, wetly slide to pieces, all around a child who'd been in the center of it all. It was worth the price of admission both then and now, setting a bar the rest of the film can only try to meet. The set is the other big-impact feature; an entire luxury liner of damp, rust, and rot. The decaying moment in time captured here is expensively detailed and creepily effective. Populating our little Love Boat are stylishly vintage ghosts, including a sexy Italian singer, a white-suited captain with a mournful face, and a sweetly ominous little girl. While the CGI shows its vintage, the set design and practical effects wow. Bodies fall apart, rotten corpses float by and pop up. Excellent underwater sequences, explosions: they spent cash and it shows.

Julianna Margulies headlines here, her first film after leaving ER, turning down the offer of a very, very large paycheck for one more season as Nurse Carol. Perhaps in retrospect not the best choice for either career or wallet. This underwritten part offered few opportunities for her to show off her chops, though she brings intelligence and dimension to what could have just been "generic lady bad ass." The film was a theatrical dud, though, and the promise of her film career kinda fizzled out. A hang-doggedly earnest Gabriel Byrne, an impossibly young Karl Urban, and Ron Eldard are here, along with Alex Dimitriades, still best known for flashing his wooden goods in Head On. Desmond Harrington and Emily Browning are both fairly fresh faces here who've gone on to bigger things (recently Dexter and Sucker Punch). Finally, Isaiah Washington is here. As this was back before he self-destructed on Gray's Anatomy, I have no empathy now for a character I remember liking on first viewing. Here, the black character doesn't get it first. That honor goes to the Australian playing "generically Hispanic," making it something of an ethnic two-fer. (He goes second.)

Revisited ten years later, I judge Ghost Ship as still a trifle, but solidly more entertaining than I remembered. It's fast and engaging, packing a few jump scares and some crowd-pleasing gore. I'll probably revisit this,  but the wait will be shorter next time.
Posted by Jay at 10:00 AM