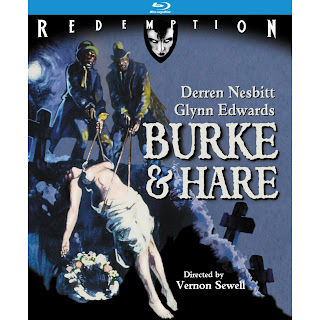 Welcome to October. No 31 reviews for the month this year, but at least one horror movie a week! This first one though has real horror in the watching, not the story. Originally reviewed for DVDsnapshot.com

The worry of what might be done to your body after you die is a fairly universal fear, which may explain the popularity of the legendary grave robbers, Burke & Hare. Their story has been told many times on film, and frequently in both fiction and non-fiction books, and they've held a steady place in the public imagination since their 1828 arrest. This uneven 1972 film is not the best telling of their tale.

While aspiring to the high gloss of Hammer's horror heyday, the aesthetic of here is pretty much “Sixties television show.” The costumes and sets always blare their artificiality. From the awful, catchy theme song (which will be in your head for hours afterwards) to the forced broad comedy, this film's tone is always off. It's like a period horror remake of Porky's.


Our intrepid villains, ladies' man Burke and grumpy Hare, quickly work out how to profit from selling bodies as medical cadavers, a thriving black market at the time. A trade seemingly tolerated by the physicians of the day as a necessary evil due to the lack of both a dependable supply of bodies and legal penalties for doctors who purchased dead of questionable provenance. To satisfy the demands of the chilly, pompous Dr. Knox, the body snatchers are soon knocking off people to guarantee a steady income. As Hare and his horrid, blowsy wife run a boarding house filled with sick, drunken deadbeats, this isn't an inconvenience.

Here, it seems the villains get busted for having the temerity to stop the good times' roll. The closest thing to a protagonist is one of Knox's medical students whose more obsessed with visiting the local brothel, home of his mythical “hooker with a heart of gold” sweetheart, than his studies. Director Vernon Sewell's The Blood Beast Terror is a superior film, perhaps because it plays on a much smaller scale. This is an uneven mix of slapstick comedy and dead-serious murder sprawls across a broad canvas with no focus. Burke & Hare aims to hit several entertainment targets at once, but doesn't hit any. A curio, at best.

Two of the most notorious figures in the history of medicine, William Burke and William Hare were a pair of enterprising street thugs who provided anatomical specimens to the Edinburgh Medical College – often by robbing the graves of the recently dead, sometimes through even more nefarious methods.

Derren Nesbitt and Glynn Edwards bring these two scoundrels to life in Burke & Hare, a colorful, early '70s rendition of life in the taverns, brothels, and surgical theaters of 1820s Scotland.

While other filmmakers have treated the Burke and Hare murders as a source of gothic horror, director Vernon Sewell (The Blood Beast Terror) offers a playful spin on the Irish body snatchers, bending dark comedy with bawdy eroticism, seasoning it with the grotesque, then crowning it with a playful theme song by the pop band The Scaffold.

Mastered in HD from the original 35mm negative, the film looks handsomer than it probably has a right to, its cheap sets illuminated with glossy key-light glares. Some scenes noticeably throb, surely due to the condition of the original elements, but the deep, dark sets are well served by HD clarity. The audio was originally mono, and always sounds clean. However, thanks to a variety of muddled accents, this is a title that would have benefited from optional subtitles.

Life is cheap in this inert take on a real life scandal. Burke & Hare is a Seventies curio of off-target bawdy humor about a couple of serial killers presented as “lovable rogues”