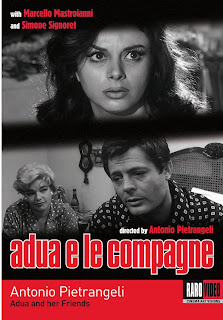 When obstacles prevent opening their restaurant, they turn to Dr. Ercoli, a local “fixer” who'll make the license happen, but only for a price. His caveat, of course, is they return to their old line of work upstairs, while the restaurant runs downstairs. I've no idea what a million Lira amounted to in 1960, but they'll owe him that every month. Judging by Adua's expression, she's a bit daunted. They carry on, but know the past will eventually come knocking.
With a restaurant that's slowly becoming successful, and the attentions of car salesman Piero (Marcello Mastroianni), Adua and the girls adjust to their new lives. One starts a new romance, another reconnects with her young son (even though she's a terrible parent). Each of their journeys are surprisingly affecting,and the film skirts sentimentality without ever falling into that trap. Their story ends in a realistic place, though not necessarily a happy one, as their bill finally comes due.

I'm ashamed to say the only other Italian film from this period I'd seen was “8 1/2,” but I was absolutely absorbed by ADUA E LE COMPAGNE. Each actress is good, but Signoret is mesmerizing even when badly dubbed. The film doesn't sensationalize or pander by focusing on the sexual possibilities of the story. Instead, the focus is on the characters and the choices they have to make in changing times. The circumstances may be different, but forced and unexpected career change is something many can relate to these days.
Posted by Jay at 11:05 PM