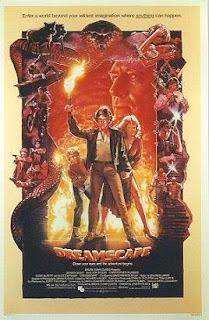 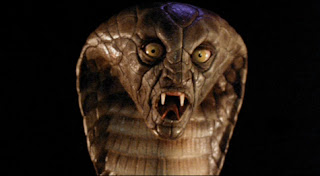 This is Sci-Fi that takes the time to get grounded in reality, and treats us to one full-on comedy dream, before the creepy images come. While most of this film is very dated by it's 1984 milieu, the dream sequences retain an off-putting and surreal visual potency. Rich colors and surreal skies define post-nuclear apocalyptic nightmare environments. You'll forgive the quaint optical processing and stop motion animation because it actually ads to the sequences. The nightmares here tip this over into the horror category for me, especially at the end. They achieve a better sense of the surreal than the Nightmare on Elm Street series accomplished, and with a few jump scares to boot. On the other hand, there's a sequence where Alex jumps into Jane's dream to put the moves on her that sure feels a little "rapey." One really off part of an otherwise strong flick.

Christopher Plummer makes for an ominous, oily heavy while David Patrick Kelly plays a colleague who's clearly an insane prick from the word go. He's way over the top, and you know that since his character is named "Tommy Ray Glatman" that he must be some sort of horrible crazy killer. A handle like that totally gives the game away. George Wendt plays a novelist ally who delivers important plot exposition and his patented charm. It's a strong cast. Stronger still is a story that, while it may start slow, comes together beautifully in the end. My only complaint is everyone is fully cognizant that they're dreaming, so they act rationally. Real dreams are a little more... Lynchian.
Posted by Jay at 10:00 AM