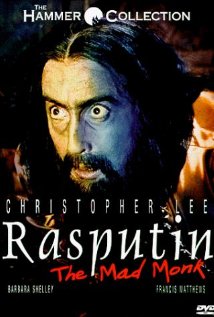 What's really well-conveyed here is the sheer overwhelming force of personality a man like Rasputin would need to barrel his way from the hinterlands to the Czar's palace. A bully, a thug, delusional; Lee's Rasputin is all of these. Starting out as a priest who somehow can either heal the sick or, more likely, convince them of wellness through the same sheer force of will that seemingly explains his preternatural ability to put away four bottles of wine before wenching, Rasputin quickly draws the ire of the locals in what is the film's first assassination attempt. The monk neither fights fair nor takes a lady's "no" for an answer.
Cast from the church (more, we'd wager, for making public knowledge those licentious acts historically condoned by clergy in private), Rasputin takes his show on the road, impressing his social betters with his energy and liver, both of which were indefatigable. He also draws their ire with his total lack of respect for the expectations of class and station. His unapologetic poonhoundery with the virtous ladies of society tends to tick 'em off, too. 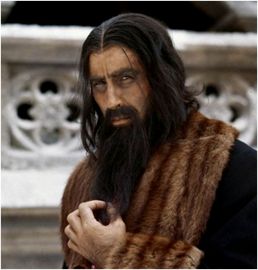 Barbara Shelley's socialite Sonia encounters Rasputin, stared down by him into a submission that, post-hypnotically, leads her back to his door. Here she encounters the other side of Lee's performance: his Rasputin glowers and sulks with a chest-rumbling pettiness. He's a sad, womanizing, delusional alcoholic. Regardless, she almost immediately lands on her back with scandalous speed for a Sixties Hammer film. He puts the hypnotic whammy on her, even though she's already quite "dick-drunk" and impressionable. The unusual sexual directness here seems to be Hammer's sly allusion to one unavoidable, and supposedly near-equestrian, part of the Rasputin legend...

He manipulates her to engineer an accident in order to gain access to her boss, the Czarina, proving it's all who you know that gets you ahead in life. Hypnosis or no, you lose all sympathy for Sonia the moment she pulls the stunt. The Czarina is a pious woman, though unafraid to remind the Lord her royally inbred hemophiliac kid is the future ruler of the country so maybe he might wanna do something about his fever. She's open to Sonia's suggestion that she bring the healer Rasputin, setting a great example for the rich and powerful of the future who'll someday turn to EST in the Hollywood Hills and Astrology in the White House.

By winning the royal fancy, our mystic healer now becomes the confidante and cause célèbre of the Romanovs, weaseling his way into palace quarters as her personal guru. He also dumps Sonia in an emotionally overheated scene worthy of better Junior High cafeterias everywhere. By now, the film's already established how... "grating," let's say, the man can be, so the final third becomes an exciting race between the conspirators planning his assassination and his growing influence upon the rulers of Russia.

Like almost every Hammer Horror of the era, the writing, acting, and production values are sturdy and well-appointed. Likewise, the pacing is a bit show even while the historical points get rushed through, A terrific stalking scene involving our Mad Monk and Sonia's avenging brother Peter (Dinsdale Landen) is surprisingly taut; a terrific lead in to an involving duel of dialogue between Lee and Francis Matthews and the smooth as silk Ivan. He's the concerned brother of Rasputin's next lady-target and bait for the inevitable showpiece: the legendarily difficult murder of the bull-strong Rasputin.

In the end, this is a role Christopher Lee absolutely owns. I've never seen other filmed versions of the Rasputin story, but I can't imagine any actor hitting the same balance Lee does. Others would either ham it up with madness or go spookily interior. The imperial gravitas Lee always carries-that sense of "what I am doing is very important and urgent and you will pay attention"-the quality that sometimes makes him seem over-baked, here sure looks like him thoroughly enjoying, in his very dignified way, of course, cutting as loose as he ever would with so baldly evil a character. When crawling and glaring, a crippled monster near the end, he's also quite scary.

A religious man-and obvious sociopath-of Rasputin's magnetism in this modern era might well smartly scale the heights of power, but his demeanor and bully's ego would probably define him as, at best, a Jim Jones or David Koresch, mesmerizing a small cadre of acolytes into early graves. Our leaders require a suave image IQ that he would hopefully never attain (without the anti-psychotics he'd also be on.) If he didn't flame out to death, he'd so smother himself in psychotic isolation he'd develop a small following to become, at best, a Fred Phelps without the obvious internal conflict.
Posted by Jay at 9:06 PM