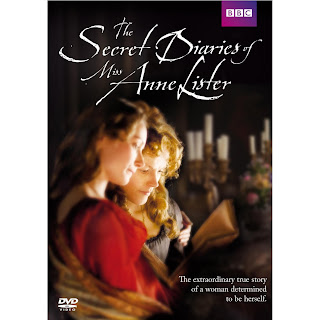 In a time before any acceptance or possibility of a public gay identity, Anne Lister worked hard to live true to herself. The highly regulated society of Regency England had no role for an independent, out lesbian, and would never discuss it in polite society. She also turned herself into an accomplished businesswoman at a time when most women couldn't even inherit property. Admittedly, the security of her wealth and station in life eased the path, but Lister made the most of it.
She held her own against cutting barbs cloaked as genteel compliments and had the support of two intimate friends, but the opportunities to develop confidences with other closeted gays were few and the disappointments many in so rigid a society. But life and truth still went on behind society's surface, as Lister pined for the love she lost to the security of marriage and society (and fear). Would she have the strength to stand against the odds in love and business? And will an unexpected woman turn it all on its ear? The story she left to history is quite compelling.

Maxine Peake delivers a strong central performance.Your heart breaks with hers before you've even gotten to know Lister. Also notable in supporting roles are Richenda Carey's society matron and Susan Lynch as a scorned lover. The writing is strong, but shows its hand with some too on-the-nose dialogue, and the production values are top notch. In the end, The Secret Diaries of Miss Anne Lister will make you grateful for the freedoms we have now, and heartbroken for all those who weren't as lucky. This is a fascinating look at a life which could have been lost to history.

Maxine Peake (Little Dorrit, Silk) stars in a profoundly moving drama based on the real diaries of Anne Lister, a landowning woman who defied the conventions of 19th century society to live openly as a lesbian.

When it is announced that the love of Anne's life Marianna Belcombe will be married to the older and wealthy Charles Lawton, Anne is distraught. And so she begins a string of relationships, most notably with the wealthy heiress Miss Ann Walker. But while Ann Walker is a proud, strong, and supportive partner in a time when lesbianism just isn't tolerated, can Anne's feelings for her ever match those she has for Marianna?

Revealing a surprising side to the world painted by Jane Austen and the Brontes, The Secret Diaries of Miss Anne Lister is an inspiring story of the first modern lesbian, a woman who challenged convention and was determined simply to be herself.

A fascinating look at a life that could have been lost to history, The Secret Diaries of Miss Anne Lister is the true story of a lesbian in the Victorian era and her courage to live her life her way.