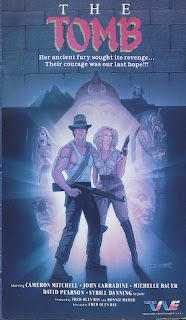 Coming up at this time were directors who ground out this product then and still do it today. Jim Wynorski, David DeCoteau, and the now deceased Andy Sidaris come to mind.You can argue, with their complicated legacies and declining budgets, if they're artists or craftsmen. You can't deny that they must certainly turn the films in on time and under budget. One must also admit, even if you turn your nose up at "class" or technical quality, they frequently succeed as entertainers.
Another one of these directors of films who succeeded in this era is the hardworking, talented, just plain fun Fred Olen Ray. The Tomb is an entertaining movie, even if not always a good one. This flick delivers on all fronts. You want action? There's a plane and car chase in the first thirty seconds. You want busty babes? Sybil Danning is flying that plane, sporting a belt of bullets and grenades.

The chase leads to a Mexican standoff and firefight between the man she's gone to meet and her clown-car of a plane filled with gunmen. In short order only Danning is left standing, with a burning plane behind her. Then the flick cuts to a musical number. Nowadays there wouldn't wouldn't be a budget to blow up the plane. Back then, there was only a budget to get Danning for that glorified cameo and on all the poster art.

Humor infuses The Tomb, and much of the era's offerings. Be it self-consciously bad dialogue or the titles that dance through the opening, at one point carried on a waiter's tray, things are lighthearted. Our protagonists make a point to let us know they're not just adventurers, but also amateur gynecologists. They go treasure hunting to the tombs of Egypt, by way of Southern California with a couple of rented camels, so no sand dunes here. Entering in between a couple of boulders with a nice, grassy lawn, they find a statue of Bast in a tomb made of Styrofoam stone (with windows, so you wonder if someone wouldn't have noticed it before now). Being geniuses, it takes them ages to notice the sarcophagus propped up against a wall. Must've been hard to find in what looks to be a 12x12 room. They plot to kill their Egyptian guide, referred to in those oh-so-PC-times as "Rag Head," but the occupant of the Sarcophagus, Nephratis, gets him first. Then she takes out one of our treasure hunters, turning from a pock-faced, pop-eyed monster to Michelle Bauer in the process.

Our remaining protagonist, John Banning (the driver of the Jeep in the opening) does the only sensible thing, runs away from the tomb and all the way to a Hollywood bar where Kitten Natividad happens to be a stripper no one seems to pay any attention to. This might be because her glorified cameo is clearly made up of insert shots into the bar scene. Confronted by some very sloppy Federal Agents, with black belts in shrugging, he makes quick work of them. Okay, one gets a whack to the head with a candy glass bottle from a helpful bartender, but its enough he can run away. Sporting a purple Hawaiian shirt with matching short-shorts, he evades chase and meets up with Cameron Mitchell. He whips out a beer bottle from said short-shorts (wherever could he have been keeping that?) and has some hard boiled dialogue, justifying Mitchell's appearance and day rate.

Meanwhile, at the airport, our ancient mummy princess Bauer has somehow hopped a plane and caught a cab to Beverly Hills to track Banning down. She confronts him, corners him, and whips up a prop scarab to burrow into his doughy belly. Between the practical effects of the bug and torso, and animated magic to create it, we get great craftsmanship on a low budget. What is it with this guy's short shorts? Even acid washed jeans would have been more macho. For that matter, where'd Nefratis get pantyhose?

When he wakes up, she's got beer and questions for him. She's magically made him her bitch and now needs him to sell out the buyers of what he looted from her tomb. The first one tracked down is the dad to the guy she killed earlier. She rips his heart out, a detail the detective in the next scene tells the man's other son to the just deal with because "people die here everyday. That's Hollywood."

At this point the remaining son and a love interest in the form of Helen, a college student and the niece of Mitchell's character come into play and I got bored by the plot complications. They become the milquetoast leads at this point. Sonny-boy finds Banning playing pinball and, of course, drinking beer. He's no help so they pay a visit to John Carradine, another big name phoning in some plot exposition. By now you've realized you're not going to see Danning again in the movie, and you won't see Carradine after this scene either.

While they hunt for Nefratis, she's out at a singles bar, rocking some heavy eyeliner and picking up a lesbian to take to a tacky tract house and feed to some pythons. There's some more plot padding as our heroes, the mayonnaise twins, have some dialogue scenes and hit the road for a musical montage of LA's Red Light district. Bauer, wobbling on her high heels, finally makes a stunning backlit entrance to confront Mitchell (Banning sold him an item earlier). Cheese-filled as the scene is, it's the only scene in the movie that dramatically works. They meet in equal knowledge and respect, negotiating for artifacts. It's but a moment, though, until she's killing Mitchell with some fantastic cartoon lighting bolts.

Bauer finally catches up with Helen and whiteboy (I don't remember his name and it's hardly worth looking up) at a bar with a horribly boring dance floor. This leads to the only other dramatically interesting scene: Bauer stalking across the dance floor in slow motion up to Helen, half staring from hypnosis and half because her glasses are off.

Later, Bauer corners Helen is her awfully-decorated Hollywood home. While blandboy is meeting with the cops, the gals are trying to imply a little lesbian subtext that, shamefully, just doesn't sizzle. The guy (who I finally remember to be named Dave) figures out there's got to be a ceremony going on to sacrifice Helen, bringing Banning back for the final few minutes of the movie. Along with Dr. Stewart, a sidekick I haven't even mentioned, they wind up cold-cocking and then performing a Scarabectomy on Banning. They head out to find Nefriti's setup in the hills. She makes quick work of Dr. Stewart and a customs agent (the guy from earlier hunting Banning) with zaps that turned them into cartoon evaporations then blows up the other agents car. This leaves just Banning and Dave. She nearly kills Banning before getting inadvertently killed by Helen. Much like putting water on the Wicked Witch, some tchotchkies Helen rips off and tosses turn Nefriti into a rapidly aging shish-kabob, until only bones remain. Those bones aim for an ominous moment but it's undercut by the bouncy 80s score.

Charming, well-crafted, with a lot of time and work put into it, The Tomb is still kinda horrible. Well, let me clarify, it's horrible sober and to today's standards. I threw in lots of plot details as you should probably avoid this one unless intoxicated. In the right mood, it's fun. The mix of on-the-cheap effects and throw-away humor hasn't aged well. On the other hand, you rarely see this many locations or scenes in today's straight to DVD cheapies. Nor do you see the scrappy, threadbare love. The story keeps moving, you keep watching, at the end you smile: The Tomb wins at being highly watchable despite itself.