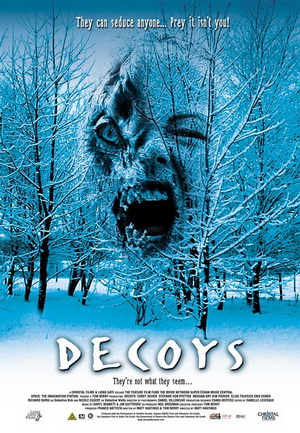 
Luke and Roger, essentially a pair of walking erections, have pals in the form of Gibby, an annoying douche who's personality is mostly summed up by his Kangol hat, and Alex, the pretty-yet-androgynous-gal-Friday-sidekick. She'd rather go watch Cronenberg "body horror" movies than be in this Cronenberg-inspired take on Animal House. The movie makes a complete break from reality by introducing these four Freshmen at a Sorority party when, in reality, they'd never get invited. Pi Beta Omega is a great cover story for Nordic space octopi who need to breed with Canucks from Earth. Head sister Vicki is also super-odd and twitchy, pretty much earning her the title of "my favorite supporting player."

Luke gets into a slapstick fistfight and has to go lick his wounded pride with good-girl Alex, which is good as he avoids a Hentai- style tentacle throat rape from Lily. Meanwhile, Roger fizzles when he should sizzle. Constance tries to take advantage of his virtue but he's having none of it, as he wants his first time to be special. In my memory, no College Freshmen ever defended himself in such a manner when drunk, though it is a good illustration at the under-discussed fact that "no means no," even when it comes from a dude. The next morning, Roger has a heart-to-heart with Luke that'll leave most of this film's target audience calling the boys "Gay." It's only interrupted when the actors hired to get this movie distributed, Detective Nicole Eggert (a DILF, perhaps) and Richard Burgi show up to investigate the still-erect boy-cicle Lily left behind. As she'd originally planned to hump Luke into an early push-pop grave, he's now the top suspect.

Even the movie quickly admits murder by blue-balled deep-freeze is irrational. So now it's up to Luke to follow a trail of clues even Scooby-Doo would find obvious. Gibby and Roger wander off to what could be their Frigidaire Dentata fates (Gibby can't die quick enough for me) while Alex and Luke plant an adorably retro-huge and admirably wireless webcam in the Sorority girls' shower (a move more believably accomplished in Revenge of the Nerds). There's also an Ice Queen party going on, mostly memorable for a runway-cum-talent show and some drunken girl-on-girl titillation. Meanwhile, Roger got drunk enough to reveal what would've been a full-fledged coming out by Junior year.

Crowned Ice Queen Lily takes Luke off for a deflowering that's almost cruelly being live-streamed to Alex. As this isn't the wisest way to bust a woman you believe to be a monstrous killer, it's also a dick move to pull on a girl who clearly has the hots for you. Lily nearly gets him, too, but a candle gets knocked over and the fire reveals the lumpy, slimy, stringy-haired Species monster inside. (This is why you're not supposed to have open flames in dorm rooms.)

You also shouldn't go tell the cops you've been secretly videotaping women while they shower. (In another ridiculous suspension of disbelief, no charges are filed.) Drama-queen Luke, who is starting to seem like a real creep, blows up at co-dependent Alex and alienates the hung-over Roger, leaving his to sneak into the sorority solo. That night, Constance finally tries to close the deal on the rather repressed Roger, a sensitive soul who'd rather discuss his roommate's conspiracy theories than lose his V-card. It turns out that, while she's someone who acts out, she's willing to admit she's a "serial killer from outer space"... because she loves him. They're not actively trying to kill anyone, they just want to find a nice, chilly place to live while they collect enough man-juice to save their species. That they let their guard down and get honest with one another is actually kind of charming. A brokered visit to an IVF clinic could have saved a lot of lives here.

Meanwhile, Luke has subdued and duct-taped Lily, fully revealing himself to be a sociopath willing to take a blowtorch and boiling water to a woman because he believes her to be a space alien. Even though she actually is one, it's still more than a little of-putting. Lily gets a last minute save, and Luke takes off to completely ruin Roger and Constance's night. Roger survived closing the deal, but did get impregnated with alien spiders for his troubles. Luke then flings boiling water at Constance, who thankfully doesn't turn out to be the burn victim of a delusional schizophrenic, but rather a squishy rip-off of Species' leading lady.

Luke gets a marvelous opportunity to confess his teary-eyed love and overact when Roger starts dying in the Ambulance. Such lachrymose grief further proves that, underneath, this may be a movie about young, repressed guys admitting they find girls scary and would rather be with each other. Along with Detective DILF, Luke heads off to vengefully turn the sorority into a slaughterhouse. They interrupt a nice turkey dinner to attack a non-alien with boiling water. Vicki wasn't an alien, she was, again, just weird. They kill Lily and two other aliens, then go chase after Constance in the Sorority's enormous basement. The place has some major duct-work and tunnels, for cryin' out loud. The completely unappealing Luke and his pistol-packin' DILF hunt down, corner, and kill Constance. Luke then indulges the poor, codependent Alex in a sympathy lay after she lets her hair down. Unsurprisingly, she reveals that aliens come in brunette, too.

The gals, our trio of slimy, slithery Sorority sisters, are fabulous (especially Kim Poirier as Constance). Burgi and Eggert are Keystone cops. Burgi, especially, seems like he wandered in from a different movie: The Naked Gun. The movie even tips it's cap to my favorite trope - the coroner with a sandwich. The whole film has an air of amusement and genuinely earns the occasional chuckle, even if the jump-scares are forced. Decoys is B-movie goodness: predictable, silly, but a darn enjoyable time. I'll probably seek out the sequel.

My only complaint is that Roger isn't revealed to be alive and just incubating alien spider-babies.

One other observation: did the filmmakers intend for our chilly-on-the-inside space gals to not have visible breath when out in the snow, or was it just a lucky coincidence?
Posted by Jay at 9:07 PM