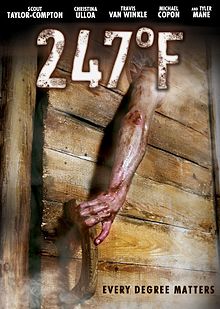 Judging from the initial idea,, you'd expect claustrophobia to play into the story, but 247°F squanders that right off the bat. By setting the story in a hot box larger than my living room, you have practical film making, but no sense of being "trapped." It turns out that the special effect of wavy heat lines and actors panting while repeating "it's hot" doesn't really turn up the anxiety. "Hot" and "drunk" lose some effectiveness in medium-to-wide shots. (That said, with proper staging, this could be a very effective stage thriller.)
The film also takes a slow, though necessary, 17 minutes getting us locked in there. A night of tequila and beer, dips in the cold lake, and a series of sub-Final Destination tension builders ("hey, the door sticks," "I should get some more water," "hey, she bopped her head on the thermostat"). When they're finally trapped, the audience response is "About damn time." Time is also taken to show off the scholarship behind the writing - research on thermostats, heat stroke, and convection heat is all trotted out for display.

The headliners here are reunited Halloween veterans Tyler Mane and Scout Taylor-Compton.. She's the traumatized lead while he's a somewhat undefined supporting character. (You keep expecting him to be somehow ominous, and he keeps proving you wrong.) The other performers are capable, if undistinguished. One friend turns out to be an irresponsible prick. While he can be forgiven for not intuiting his friends are trapped, the rest of his boorish behavior means he should meet a worse fate than he does. Another character has a breakdown out of nowhere. It may be understandable, but it isn't earned. Taylor-Compton, as always, is very good, though she still reads to young to be a character with a dead fiancee. The other female lead, Christina Ulloa is easy on the eyes, and acquits herself quite well. I definitely expect to see her again. The filmmakers Levan Bakhia and Beqa Jguburia also show great promise, and I look forward to whatever they make next. In the end, 247°F ratchets up more tension and satisfies better than you'd expect. It reminds you that it's the stupid coincidences and in life that get us trapped and finished...