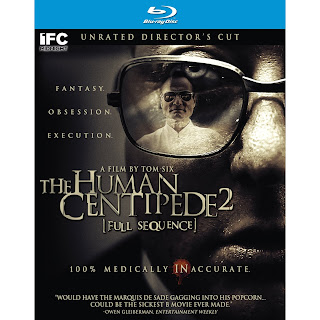 Similar to Blair Witch 2: Book of Shadows, Human Centipede 2 (Full Sequence) starts with the conceit that the first film is “just a movie” within the story. The ending of the first film was hopeless, but implied the survivor just might get saved in the end. Here, that minimal, stylish first film has inspired a dark, dingy, black and white “by necessity” neo-realist gorefest completely lacking in redeeming qualities or hope for humanity. You don't watch The Human Centipede films to be entertained so much as to recognize the fact that someone made them at all.
The first film's dazzling, over-the-top Deitrich Laser's Dr. Heiter here inspires his polar opposite in Martin, who is silent, sweaty, and truly off-putting. Laurence R. Harvey, an unusual looking man, is a true find. He makes quite a splash in his film debut with a career-defining, career-ending performance. All sweat, bugged eyes, coughs and wordless grunts, he commits with gusto to this awful character. It takes courage to expose yourself in circumstances like this, and expose he does...

Parking lot attendant Martin is a obsessed fan of the first film, and watches it repeatedly when he isn't bashing in the brains of cranky patrons with a tire iron. Martin is a truly pathetic vision. His horrible home life, complete lack of skills, and loving scrapbook of Human Centipede promo materials shows him to be a man of limited interest and intellect... but big dreams. His dream (and shouldn't everyone have one?) is to create his own, full-sequence centipede. 12 people, sewn together heads-to-hindquarters, sharing one long digestive tract and acting out the film for his amusement. Needless to say, bad stuff happens. His great coup is luring the first film's lead actress (playing herself as a bit of an airhead) to England and making her the star of his show.

There's some wicked black humor here that actually provokes laughs, but everything about Human Centipede 2 is repulsive. From Martin, a character irredeemably sick in both mind and body, to the brown used as an accent color (in exactly the manner you think), the ugly is always in the viewer's face. Emphasizing the history of physical and sexual abuse Martin's suffered as just pure, cruel titillation is a particularly egregious choice made by the filmmakers. The other, underdeveloped characters are just meat to torture. Nudity, violence, feces, blood, gore... it's all here, and all coldly calculated to provoke a response.

More than that, it's just a grueling film to watch. Violence done to teeth and with a staple-gun will have you watching the last third through laced fingers, if you're still watching at all. Perhaps a case could be made that this is some sort of mediation on film fan culture, but that's an argument made after the fact and to justify. Where the first film was too restrained, this one tries too hard.

Audio & Video:
The cinematography (shot in color but converted to black and white for release) is crisp, with blacks that never get too muddy in even the darkest scenes. It's not a pretty film, but the visuals are clear and free of artifacting. The audio is 5.1 Dolby Surround, and catches ever squish and whimper.

Everything glossed over and left to the imagination in the First Sequence is wallowed in and thrust in your face (in black, white, and brown) in the Full Sequence. Effective film-making that provokes an audience's response, but the joyless, cruel exploitation here has no redemptive qualities.